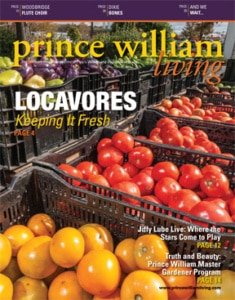 Click photo to view and read the April 2015 issue online.

Ok, the title and sub are hokey! I get it. But have a bit of humor because I’m happy to announce that one of my photos is on the April 2015 cover of Prince William Living. Prince William Living is a regional full color magazine serving Prince William and Greater Manassas Virginia. They cover lifestyle and topics of interest to the business community and public.

The article was about how to eat local and become a Locavore (someone who sources their food within 100 miles.) It includes information on other Prince William County farmers markets as well as area restaurants that source their food items locally. There is also info for the DIY grower. Read the full magazine online. It’s a really interesting article written by Marianne E. Weaver and includes an additional photo by one of my fellow PWL photographers; Linda Hughes. All this food discussion makes me hungry just writing about it.

Several of my other photos were also used in the story as well. I photographed vendors at the Dale City Farmers Market in November 2014 for this article. It was a very cold day for all as I walked around and visited many of the vendors. Photographing on a cold day has it’s challenges and on this day it was also very windy. Despite the gusty wind and cold temperature, I carried a light stand with a flash unit attached so I could light the vendors with non-directional light as I photographed them. This helps contribute to the natural look that some of the photos have. While I could have used a large studio strobe to do this shoot, I elected on a small compact flash unit. In the event the wind blew over the light stand, it was less expensive to replace the small portable flash.

PHOTO TIP: Did you know that when you photograph using a flash unit, you actually have three light sources to work with outside: the sun, the ambient light, and the flash. Learn to use the sun as a highlight, the ambient as background fill and the flash as subject fill.

Prince William County has a lot to offer without being too urban or too country, it’s right in the middle. Being a photographer in the Woodbridge, Manassas area is a delight because there are so many things to photograph.

Here are some of the other photos from that cold day. If you find any photos you like, you can purchase them through pwlphotos.com.

Maybe you’ll see me doing photography in Woodbridge, Manassas, or even Dale City some time. If you do, please say hi! In addition to editorial photography, I have been helping clients get their products on the web with studio product photography. Just one of the many services I offer.

Why should you hire Mark Gilvey Creative?