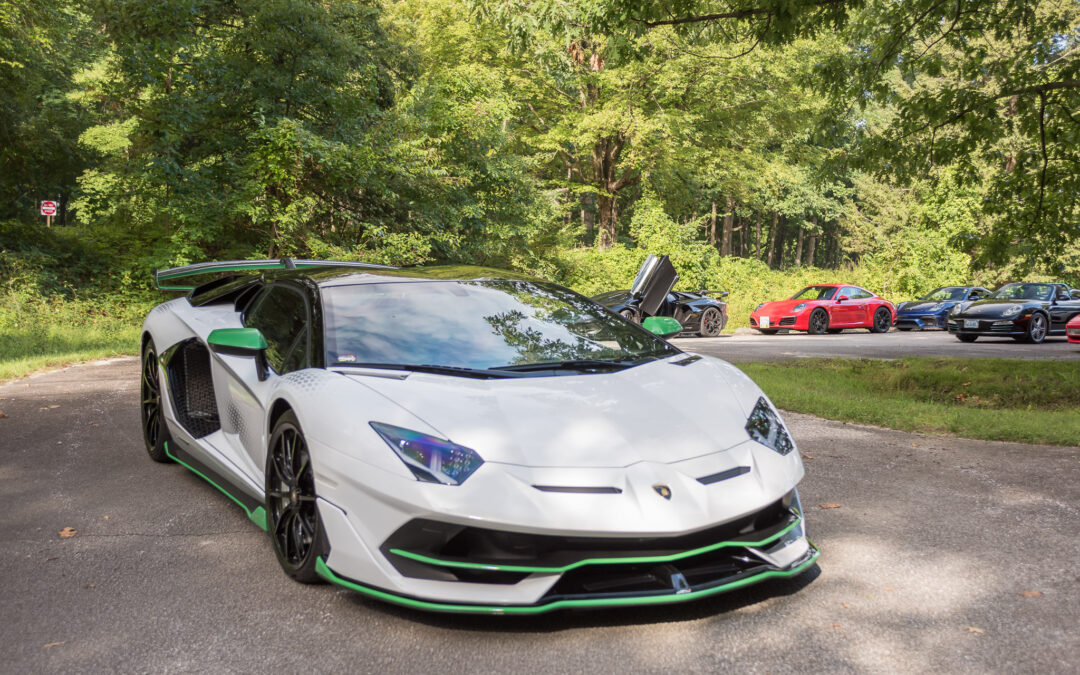 Faster than my Acura SUV!

What makes me excited, what gets me going, are supercars. In September 2021, my wife and I had the opportunity to participate as staff members of a sports car driving tour organization known as EuroSport Tour. This was the first time I had photographed an event like this. The tour started at a park in middle Pennsylvania. As the cars came in, my wife and I (and others) checked them off the list and sent them on to be directed to their starting positions.

I roamed around and photographed the cars. Many of my favorite marques were there, including Porsche, Ferrari, Aston Martin, McLaren, and Lamborghini. It was quite exciting. I had photographed several Lamborghinis and a Ferrari at the estate of a private owner in the mid-1980s, so I was used to being around exquisite automobiles, but I’ve never been around this many in one go, save perhaps an auto show.

I worked my way down the “starting grid” taking my time. For not having any studio strobes with me, my photos look really good. Had I brought a tripod, I could have gotten more depth of field and detail. But I didn’t have that kind of time.

Breakfast and a driver’s meeting were in a nearby pavilion. Kevin Sims and his father have been organizing events like this for many years. This year, Kevin had invited the lead test driver for Lamborghini, Valentino Balboni (Ret.), to the event to lead the pack. The man is a true gentleman and emitted a glow of happiness that could not be ignored. He came from Italy, so naturally, I had to introduce him to my wife (who is from Corsica, France).

Below are several photos of the various cars he’s had over the years. Click or tap an image for a full-screen eye-candy view.

Sports cars have always made people’s hearts race. But is there more to them? I contend that there is a lot more. While a sculpture by itself is a great work of art, so art these cars of blinding speed. But now, let’s get even closer and look at the details more. Let’s look at the graphical elements that could very well stand on their own, on a gallery wall. This is the art of a supercar. Click for enlargement.

“I visited Eduardo Miura’s ranch in Seville where he raised bulls for bullfighting, and I was so impressed that by the time I got home I had already selected my future emblem.”

My wife and I tried keeping up with a couple of Lamborghinis, an AMG Mercedes, a McLaren, and a couple of Porsches, but my streamlined Acura MDX wasn’t happening. We ended up getting lost, should have stayed on course using the turn-by-turn directions. This was a good experience for us. If you have a navigator and you end up using GPS; put it on both your phones. That way you will know instantly if you entered the same address in both. So, we got lost, and didn’t get to meet up with everyone at the next stop on the tour; an airport with historic planes in Reading, Pennsylvania.

With an executive decision, I decided we would miss the group if we continued to Reading, and decided to head to our final destination; the Simeone Car Museum in Philadelphia. This was a real treat! It was full of sports cars, sports cars, and more sports cars! What more could you want? Lunch? We had that too. It was furnished by 12 Street Catering in Philly. It was absolutely delicious!

The moment had finally arrived. I heard the sound of an engine startup, it was the Porsche 917LH just outside. Everyone made their way out to see it. There were several Youtubers in our group and they were having a field day, including Savage Garage and DoctaM3.

Everyone looked on intensely as the demonstration of this magnificent thoroughbred persued. The area was elbow to elbow as the 917LH was driven around what looked like a quarter-mile loop behind the museum. However, I didn’t partake in the excitement. Nope, I immediately saw how many people there were, noted the position of the sun, and the direction the car was going. As a commercial photographer, these are the kind of things I look for. Really good photos have an impact, good lighting, and composition.

So, I quickly made my way down to the far end of the museum grounds and sat on the ground with a 400mm lens.  From this position, I could capture the sun in the driver’s face instead of at his back like it would in the previous location. The car also went through a turn where it was side-lit. The photos below are exciting. I’ve waited 40 years to see this car and I felt fulfilled with all the access I had to it. I left knowing I had captured everything I could of this 24 Heures du Mans podium finisher. The only thing that could have taken it over the edge (besides being able to drive it which I don’t think they would be interested in letting me do) would have been to hear the car at full chat!

I approached this project with simplicity and portability in mind. So I brought five lenses, one Speedlite, remote triggers, and a tripod. Oh, I also brought circular polarizing filters. The triggers are attached to the camera hot-shoe and the Speedlite. This way I could hold the camera in one hand that the flash in the other, keeping it off-camera. If I happened to set the camera on the tripod, I had another trigger on my belt that would fire the camera and flash, but I never got the opportunity to use it—there just wasn’t time for it.

I had polarizing filters on any lens I used in daylight (vs an interior). It didn’t help as much as I thought (surprisingly), but it did help. You can see the effects of it in the individual car photos—you’ll see either a section of pure color without glare or no glare in the windows. I can’t wait to do this event again next year. 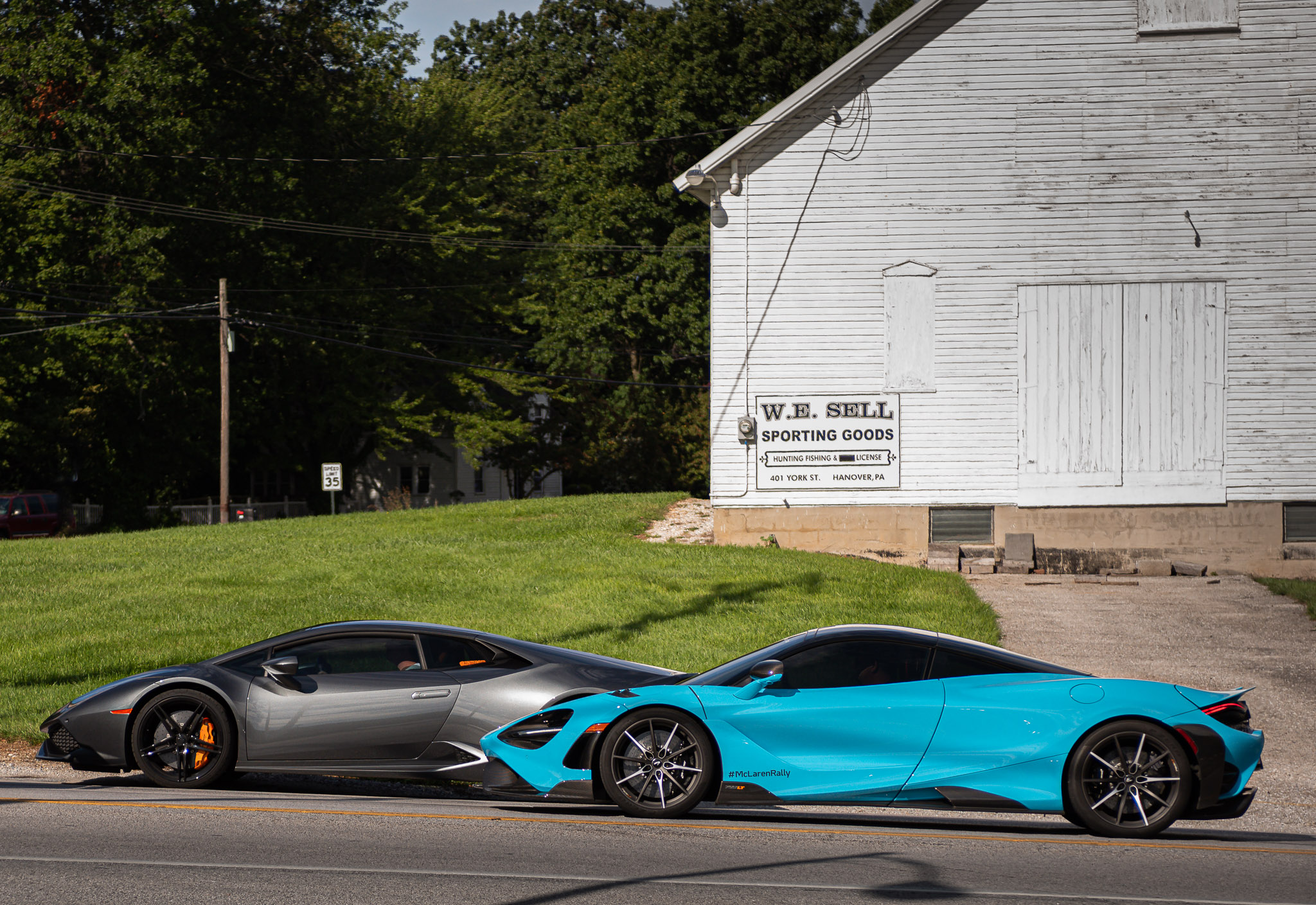