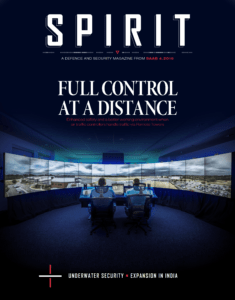 I really shouldn’t be surprised but I just find it interesting how projects come together. Recently, a friend of mine (Carsten Schmidt, a Washington DC  based street photographer) referred me a very cool commercial photography / editorial photography gig. The client, or maybe I should say clients, started with a temp agency (Coworks in San Francisco.) A Belgian guy by the name of Henrik Dillman who manages talent was hired by a Swedish magazine publisher (Appleberg in Stockholm, Sweden) who was hired by SAAB (also in Stockholm.) Yes in case you were wondering, it’s SAAB the car company or should I say former car company. Aviation is really their core business after all. It gets better, the man who was interviewed for the article, Matt Massiano, for SPIRIT magazine flew in from New York. But wait, there’s more; there were several FAA personnel and SAAB employees that came in from various other parts of the US to take part in testing the Remote Tower as well. Talk about connecting the dots!

Photo shows my camera setup on the rooftop amongst the plethroa of bird decorations. This image WAS NOT part of the magazine article—it just shows what we as photographers have to go through some times to get a great photo.

They were looking for someone who could photograph a Remote Tower. The tower and command center module are sort of like an Air Traffic Control (ATC) center but without the glowing LED lights and radar scopes that were used in the past. It is located at Leeseburg Executive Airport (KJYO.) I told them that I photograph for Prince William Living magazine, showed them my commercial photography portfolio and mentioned that I’ve photographed for the aviation industry before for Aurora Flight Sciences in Manassas, Virginia. Everything was set and off I went.

I was really surprised when I got to see the installation. Looking at the small tower on top of the terminal I thought how things have changed in aviation support systems. I brought a car full of camera gear since I didn’t know where I was going to be permitted to photograph. So I prepared with my normal kit I use for photographing for a magazine and added four more studio strobes in case I had multiple things and/or people to photograph.

I photographed the airport main terminal with the remote tower on top of it from in front and on top a building located across from it (a messy project in its own right considering how many birds worked their exterior decorating magic skills where I had to place my tripod—dang, forgot my gloves!) I was all over the Remote Tower with my camera, long shots, establishing shots, close-ups. I also made a couple of portraits of Matt standing next to the camera post, thinking the magazine might use one in a small image and voila, they used one as the lead image for the article. 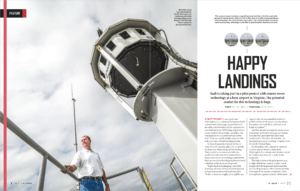 Matt Massiano was interviewed for the article by the magazine. An ultra wide angle lens provided enough width for me to capture this portrait of Matt next to the tower. Click for enlargement—read the article.

When we went down to the operations center with all my gear—it was stunning. Simple, clean, and 15 large TV monitors attached side-by-side in front of a main console that reminded me of something out of Star Trek. I could have spent an entire day in the operations center but I didn’t have that much time. One of the FAA marshals feared my strobes would interfere with the other air marshals operation of the control center. So most of the photography I did within the control center was done under available light. 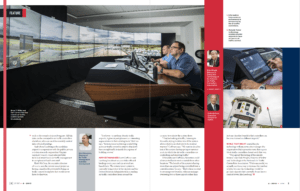 Another ultra wide angle view of the console. Click for enlargement.

At one point they were going to take a break in the testing so I preset my strobes and took photos while they were away and just after they sat down to start working/before they started working.

The publisher received a great set of images to choose from which would let them take the article in many directions depending on what they wanted to talk about. In the end it all came together and the publisher was pleased—the dots were connected over international boundaries and the article is now technology history.